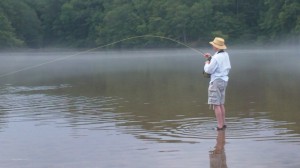 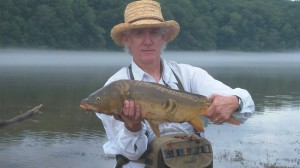 The dense, pre-dawn fog rising from the surface of the Chattahoochee River provided a refreshing coolness.  It betrayed the stifling, merciless July heat that would be baking us in a matter of hours.

As usual, I was eager to reach my favorite fishing hole and nudged up the throttle on my little Mercury 9.9 as much as the limited visibility would safely allow.

We traveled in silent anticipation down the river.  We focused all of our concentration on making sure we didn’t have a surprise encounter with a big, floating log… or worse yet…a collision with another rower plowing speedily upstream through themist…in reverse. (What are they thinking?)

My fishing buddy, Henry Cowen, was the first to break silence.

“Hal, are there any mirror carp in here?”

“Well, I caught one about 25 years ago. It was a 24 pounder.  I used to see a few of them back in the old days when I bow-fished here a lot.  But I
haven’t seen or heard of one being caught since then.  Don’t know if they’re still here or not.”

A moment later we arrived at our destination, which was a large, shallow flat where we hoped to find some “tailers” working.

We slipped  my little 14 ft.  jon boat through a narrow cut which led from the main river channel into the flat.

“Let’s stop here and anchor the boat.  We can move faster and cover more ground if we wade.”

“Wade?”   I could tell by the look on Henry’s face that leaving the boat and stepping  into the cold, muddy, murky river water was not what he had in mind.  Yankees are easily spooked in swampy areas.

But he took my cue and we grabbed our 8 wt. fly rods and stepped out of the boat into the shallow water, fired up a couple of Arturo Fuente Hemmingway’s ( courtesy of Henry) and sloshed our way toward the flat.

No sooner had we gotten within sight of the fishing area than we began to see tell-tale ripples up ahead that told us we were in for some excitement.  We saw fish!

We each began to strip line and prepared to cast to our first targets of the day.

I spotted a feeding fish in some current where the cut emptied out into the flat and chose to make this my first attempt to hook up with “Mr. Rubberlips”.

It was a good choice.  I carefully crept to within about thirty yards of the tailing fish and made a really nice presentation.   Almost immediately the big carp sucked in my little rust colored swimming nymph and we were off to the races!

If you’ve never hooked a carp on a fly rod in ten inches of water, I can only describe it as “like hooking a go-cart.”

“Wooo Hooo!”  I yelled as I held on and let the carp do his thing…which normally is to take off like a spooked warthog  with a leopard on his tail.  All you can do is hang on and hope and pray he doesn’t wrap you up or pop you off within the first 15 seconds. If you can survive the initial run, you have a fighting chance.

Henry, seeing that I was into a nice fish, waded over and offered some moral support.

It was into a nice fish alright.  And, as I began to work it closer, I noticed
something strange.  It didn’t look like a normal carp.

“Henry, there’ssomething weird about this fish.  Look at it.

Yep.  The first fish of the day way a ten pound mirror carp. We added 5 more common carp that day.  6 hookups and 6 landed fish…and back home in time for lunch.  What a great day on the water.

It just doesn’t get any better than that.

PS. Can anyone tell me the best place to catch a grass carp on a fly?  I’m going for the “Grand Slam”!

PPS.  Go to http://www.GaFishing.org and subscribe to my blog and watch my videos on carp fishing…and turtle grabbling!