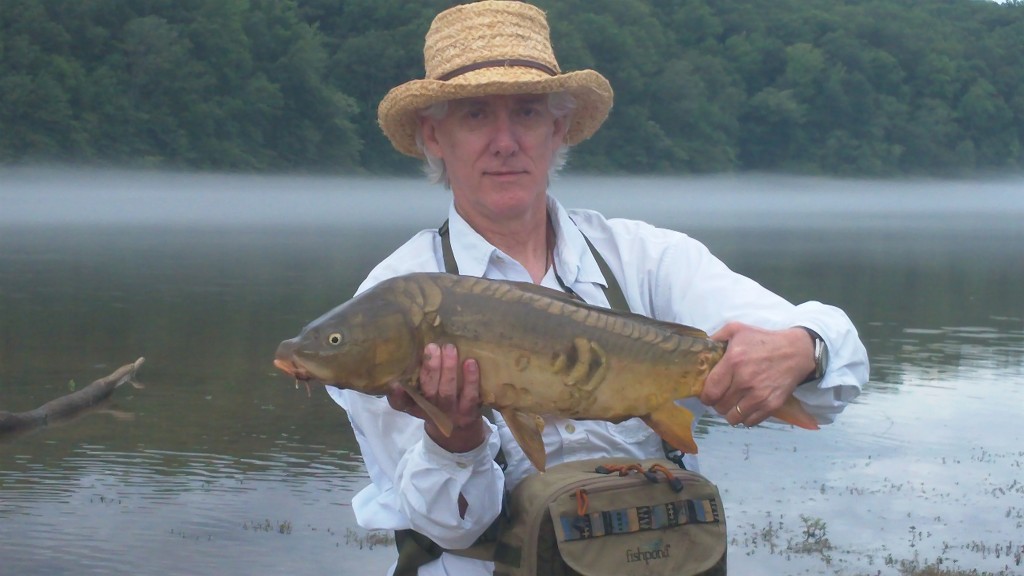 The above fish is a 10 lb. mirror carp I caught on a fly rod on The Chattachoocee River.  This fish ate a small swimming nymph.  I caught another one 25 years ago on a spinning rod. It wieghed 24 lbs. 2 oz.  They are the only two mirror carp I have ever caught.  To have caught this one on a fly rod is a real trophy to me!

See Hal and Henry Cowen stalking the flats and catching HUGE CARP on the fly rods!

Hal with a 40 lb. Snapper caught on 9-27-10 in the mud flats in Bull Sluice Lake. We took these pictures, then released him. 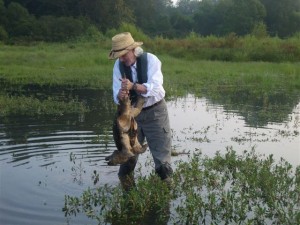 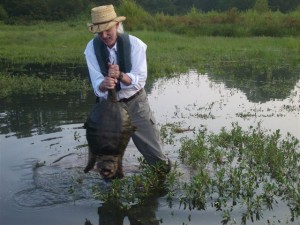 This Ga Fishing story is TRUE.    The names have not been changed to protect the innocent!

Before you say, “That sounds like some stupid thing Hal would do”, let me say…..I totally agree.

Here’s what happened to me this morning. I must say, I’m amazed that I am sitting here writing this story. A couple of hours ago, my options didn’t look so good.

I went to ‘The Hooch’ this morning alone. Not always the best idea, but sometimes you just don’t have any choice if you want to go fishing.

I knew the water was gonna to be very low following the holiday weekend, and I thought I might catch a few trout, but I got there just as last night’s water release at Buford Dam was reaching the Bull Sluice area. It was rising fast and very turbid. Not good for trout.

And so I decided to go into one of the back lakes. I knew there would be no water other than the main channel. I thought I might find the tracks of a large snapping turtle crossing the mud flats. Hunting for huge snappers has always been a passion of mine and I thought this would be a good time to find one.  (See the one I caught a couple of weeks ago at the top of this page.)

I poled my 14′ jonboat into the channel and back into the lake. I tied it to a tree stump and got out of the boat onto the dry mud flat and started walking, searching for turtle tracks.

Well, low and behold, I didn’t go far until I cut the track of a HUGE snapping turtle. I began to follow it across the flats. It was headed for a small channel. I got farther and farther from the boat and into the mud flat. I was wearing sandels.

I noticed as I walked that the mud was becoming stickier and heavier on my sandles. It was becoming more and more difficult to walk. And that’s when the tide suddenly turned….and not in a good way.

All of a sudden my right foot sank in the mud up to my knee! I tried in vain to pull my foot out of the thick mud. Finally, my foot just pulled out of my sandal and I got free….or so I thought. I reached down into the mud and pulled my sandal free. Be then, because of my struggling, my left foot was now up to the knee in the mud.

I tried to take a step with my bare foot, but, because there was no flat shoe bottom to create resistance, my foot immediately sand up to my knee. I realized it would be impossible to walk barefooted. I had to have my sandals.   So I reached into the mud and worked them free and managed to get them back on my feet. But with the very next step, they were off again.  This wasn’t working at all.

What made it bad was this. The mud finally caked up so thick on my sandals that it created a bonding, almost like super glue. The suction was unbelievable.

I knew my 60 yr. old butt was in serious trouble. I was not within shouting distance of anyone and not visible to others who might be on the river. I was all alone. And I was stuck in the mud.

I had visions of heartless black vultures swooping down and pecking out my eyeballs as I lay there totally helpless. Maybe they find my bleached skeleton in the Spring and write about me in an outdoor magazine.   I began thinking of the Donner Party.

And then……I remembered watching an old Tarzan movie and saw Johnny Weismuller escape from “Quick Sand” by lying down on his belly and crawing. And so that’s what I did. I just bellied down in the muck and started wiggling and slithering like a snake in a tar pit, pulling myself along with my elbows and shoulders.

I had to cover about 75 yards to get back to reasonably solid ground. I was totally out of breath by now and my heart was pounding so hard I was convinced it was going to seize up any second. I had to stop and rest after every wiggle.

Well, I finally belly-crawled my way, inch by inch, to safe ground and just collapsed into the mud. I was totally….and I do mean TOTALLY EXHAUSTED. I’m convinced that, were it not for my regular jogging and workouts, I’d still be there in that mud.

It was the most physically exhausting thing I’ve ever done in my life. I pulled every muscle in my body. I ache from head to toe. I am loaded up with Ibuprofen right now and getting ready to take a long hot soaking in my spa.

As for the turtle, I never did find him. But I know he’s out there, and I’ll be back. He’d better be on the lookout for me.

But now I know where to walk and where not to walk!

Ga Fishing tip: It’s always better to have a fishing buddy along. They might laugh if you do something stupid, but they’ll be there to help you in the end.